For the next instalment of our 10 Questions with feature, we speak to emerging Brooklyn artist A.D. Wells about his new record,The West Hollywood Broken Hearts Club. We discuss whether streaming platforms allow emerging artists a fighting chance at breaking into the industry, inspiration for the record, and the power of social media.

Who are your three favorite artists at the moment?

At the moment I have been listening to a lot of Lou Reed. It wasn’t until a few months ago that I really discovered his music-his vocal and lyrical delivery is just genius like. It’s not hard to see how much of an impact he has had on some of my other favorite bands like The Strokes and maybe even The National a bit. In addition to him Alex Cameron is easily one of my favorites right now. His first two records are just brilliant and I’m really excited for his third, he’s been a huge inspiration to me. Finally, Hippo Campus. They are such a rad band and i’ve been really getting into their 2018 record “Bambi.” I think thematically and content wise they did a really great job of capturing and making a record that is cohesive. Short answer though: Lou Reed, Alex Cameron and Hippo Campus.

Do you find other mediums of art also influence your music?

I think any type of artistry is important and can definitely conjure up influential capabilities. I think when I sit down to write music I am mainly inspired by thematic and emotional elements paired with some music I love, that gives me a starting point. Once I decide on a topic I want to explore and write about that’s when it usually starts to go through my own filter. Besides music, film is a big one for me and so is photography and painting. I’ve begun the beginning stages of my second record and I have about 8 photos in my work space that just put me in a place mentally that reminds me of the early iterations of what I am beginning to aim for with this new music.

What is it about the imagery of Hollywood that pairs so well with the feeling of melancholy in your music?

I am really proud of this record, “The West Hollywood Broken Hearts Club” especially in the sense that I think I really captured exactly what I wanted the record to say and express. Hollywood offers a really fascinating glimpse at the human experience in a lot of ways, especially in the sense that it seems like some people try to ‘escape’ to Hollywood and find this golden life that they think exists by going there which is not always the case. Although that’s a small example I think on the large scale that idea represents the idea that people seem to be running from things-their own feelings, other people, their own worst thoughts, the path that life has laid out for them, their own selves, and they want to escape it and find meaning in something glamorous and this preconception of happiness: that was the starting point for this record. Hollywood is a beautiful place and can be a happy place but there’s a dark side to it, that’s what this record is addressing. 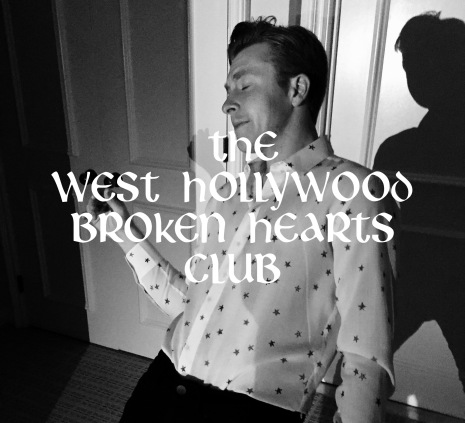 Do you think narrative is important for song writing?

I think narrative is really important. I think narration combines two beautiful elements of song-writing: realness with personal experience. As much as this

record is set in this place (The West Hollywood Broken Hearts Club) I am definitely in the songs for sure. Once I had these ideas and experiences I wanted to write about I found myself channeling them through this filter of the ‘Broken Hearts Club,’ and thus kind of detaching myself from the song itself while still being in the DNA of it. In a lot of ways I can imagine A.D. Wells is a character and a figure of this place which was another way that added so much creativity and imagination to the writing process of this record. What would he be seeing in this place? Who would he be seeing there? As much as it was creative, it was very inspiring to put myself in that mindset.

What’s your favorite track from the record?

It changes! I think cohesively as a record these tracks are very strong together as a body of work. Individually I really do love the single ‘Crush,’ I think it’s a tune people can dance too and one that still remains thematically level with the rest of the songs. Redondo is one that I actually wrote last for the record but I find to be very strong, instrumentation and content wise I think it’s really great and I’m proud of it, I’m proud of the bass line in that one haha.

How do you use social media to gain an audience?

Social media has been a really great way to gain an audience! It offers an ability like never before to connect with people around the world and share your music with them. It’s crazy to me that people in the UK listen to my music, that’s just something I never thought would be possible-it’s surreal. By connecting with other unsigned musicians and smaller bands/acts it’s a way to work with each other and people that listen to them to share your music with a new group of people. Overall I can’t imagine how challenging it would be to grow an audience without Instagram or Spotify/streaming services.

From your own experience, do you think platforms like YouTube and Spotify has had a significant impact on the music industry?

I would say yes it does have a big impact. Even besides being a musician just being a big fan of music it’s pretty clear that it has changed the landscape for how music is not only distributed but also how it’s being heard. I’m such a big fan of albums as whole cohesive works but it seems like the recent shift has been geared more towards singles. No matter what the mainstream seems to get behind though I’m hopeful there will always be a market for the LP, which is a good thing in so many ways.

What has been the most difficult part of releasing your record independently?

Although it might be difficult, I think it’s also equally motivating at the sheer fact of how much music is being put out! There are so many musicians writing and desiring to be heard it’s also motivating to work harder because you know so many other artists are working hard as well. I’m proud to be an independent artist though, it makes me that much prouder of what I can accomplish and I am

happy to represent so many other musicians that find themselves in the same space.

And what advice would you give to other young artists starting out in the music world?

I would say the biggest key is to just get started and work hard. Writing a song can be a daunting task, even though I still feel that weight, once you get one done though the process gets just a little bit easier and easier every time. Music is a powerful tool and a wonderful way to express yourself-embrace the feelings and motivation inside you, never forget why you wanted to start and just take it day by day. It’s a beautiful practice making music, especially when you can keep the work true to yourself.

Finally, what plans do you have for the future that we can look forward too?

With A.D. Wells I have already started the early process of the second record, I have a title and some demos done so it’s fun to get that started. It’s tough to not work as hard as I can and get this record out but I also feel like part of the process of making a record is taking time to get inspired and really decide on what kind of record I want to make. I have to remind myself to be patient and enjoy the ride of getting this first one out first! I’m hoping by maybe early 2020 to get out the second LP. I’m also in a band called SOPHOMORE and we are hoping to get our debut record out soon. So yea, my bands debut record, the possibility of touring this A.D. Wells record a bit and my second solo LP. It’s a busy time, but I love it and it feels like a dream so it truly is nothing but enjoyable.