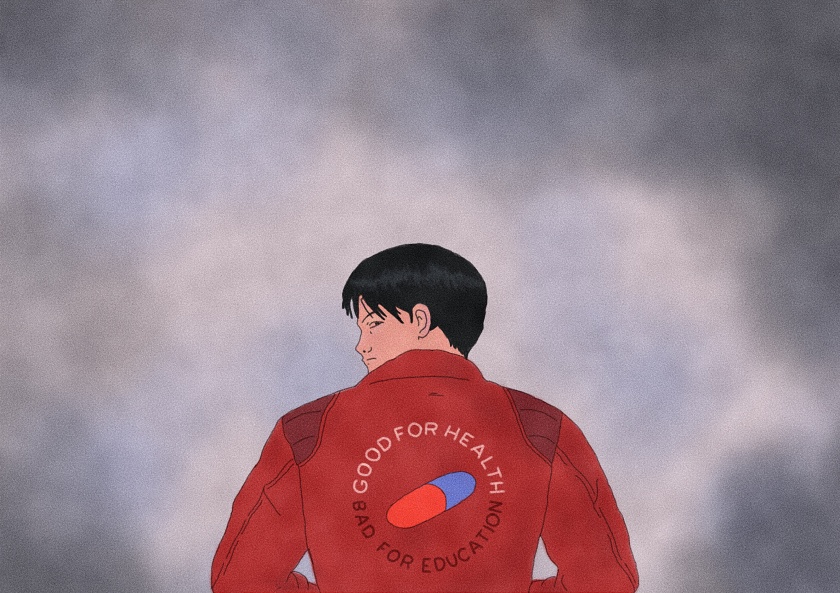 The revolutionary 1988 film Akira is a cult classic for a reason. It introduced the West to the true potential of Japan’s animation, and undoubtedly influenced film for years to come. Based on the Akira series by Katsuhiro Otomo, Akira is a cyberpunk teen fantasy set in the post apocalyptic Neo Tokyo, 31 years after World War three and an atomic bomb/ESP experiment devastated the city.

Japan 2019 is seemingly in a state of repair from the trauma of war. An 80s-esque urban cityscape, streaming neon lights, fluorescent holograms, and biker gangs? Conflict consumes the opening of the film: student protestors clash with riot police, vigilante bōsōzoku biker gangs hunt their rivals, and resistance groups flee government forces. Somewhere in the midst of all this turmoil we are introduced to Kaneda and Tetsuo, members of the Capsule biker gang. Whilst chasing down their rivals, the film cuts to a man ushering a withered looking blue skinned boy through riots and grid locked streets. When riot police shoots down the man, the boy escapes. Tetsuo, almost crashing into the boy, veers off and crashes his bike. A secret service type organisation, the Japanese Self-Defense Forces, arrive to collect the boy, and hastily take Tetsuo too, leaving Kaneda and the rest of the gang to be arrested. Tetsuo becomes the focus of a psychic military experiment; and Kaneda, resolute on saving Tetsuo from a secret government project goes on a wild pursuit battling government forces, corrupt politicians, and unethical military scientists.

It is not just the distinctive narrative that cements Akira as one of the greats. Its exceptional animation (an extraordinary 24 frames per second), and ageless relevance make it an immense feat of work. Similarly to other post World War Japanese films, the post-apocalyptic Akira mirrors the destruction of Hiroshima and Nagasaki. The recovery of post war trauma is a key theme; influencing not just the social and urban landscape, but the mentality and motivations of the films characters. The people, the working class, want freedom and revolution; whilst the government’s attentions are focused on the preservation of power in a city rife with revolt and crime, and an economy still very much shadowed by war.

“Simply put, no Akira, no Matrix. Its that important.” –Kim Newman, Empire

Akira should serve as a warning, especially with the current political climate. Totalitarianism is not tolerated in any form, the corrupt get their just deserts, people have the power, and “disillusioned” youth are not to be messed with. The film illustrates how many adolescent felt at the time, and with current feelings of futility and anger, makes Akira even more relevant than ever. The self-proclaimed omnipotent is juxtaposed by the black and white morality of children. But it’s the explosive nature of the youth that is the real threat to the powers in charge.

Through the violence, gore, and destruction we see the fragility of mankind. But we also get a glimpse of resurrection, a chance that maybe things can change. A landmark in animation and film, Anime fans and skeptics alike can all agree, this isn’t a film you want to miss.